ISEE has been collaborating with the Daniel K. Inouye Solar Telescope (DKIST) for many years, including:

Internships to build a STEM workforce on Maui: Akamai

Each year funding from DKIST and the National Solar Observatory supports many students in participating in Akamai. Some students work directly on DKIST projects, which provides training for future DKIST jobs, or jobs at other telescopes and high tech companies in Hawaii.

More than 90 Akamai alumni participated in NSO career development workshops, including mock job interviews, held on Maui from 2010-13, resulting in:
5 summer internships at NSO
2 hires at DKIST/NSO
2 hires at other Maui tech organizations

DKIST is hiring locally, and has hired three Akamai alumni.

Effective mentoring: Investing in training the next generation

Through participation in the workshop DKIST mentors provide projects for local college students that are high quality training experiences AND make real contributions to DKIST (see box below). 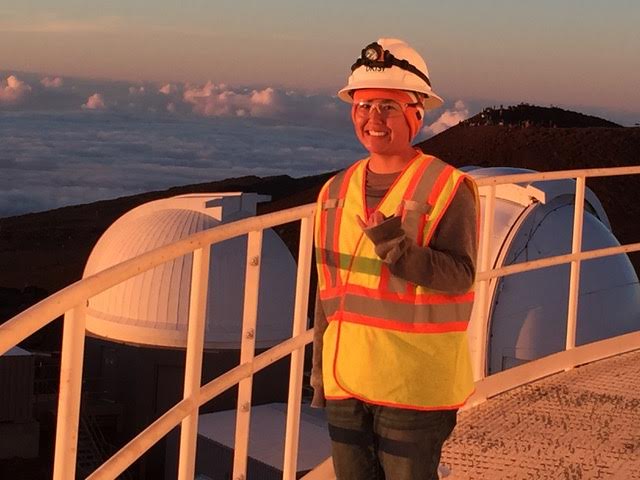 Brialyn Onodera, a mechanical engineer major at University of Hawaii at Manoa, worked under the mentorship of William McBride, a DKIST engineer on a project to measure vibration in the telescope enclosure. Brialyn graduated from UH Manoa in 2017 with a bachelor’s degree in mechanical engineering and is now an assistant engineer at the Daniel K. Inouye Solar Telescope!  See more here: Hilo local hired as an engineer for DKIST

Keoki Massad
From Oahu (Kamehameha Schools graduate)
Worked on developing an algorithm for data analysis from CryoNIRSP, a DKIST instrument. Keoki worked under the mentorship of Jeff Kuhn and Andre Fehlmann (Institute for Astronomy). (2017 Akamai).

Joshua Parep
University of Hawaii, Hilo student
Worked on building a graphical user interface for the CryoNIRSP, a DKIST instrument. Joshua worked under the mentorship of Isabelle Scholl and Andre Fehlmann (Institute for Astronomy). (Akamai 2017).

Brialyn Onodera
From Hawaii Island (Kamehameha Schools graduate)
Calculated vibration transfer for the DKIST as part of a larger project to ensure that vibrations are kept to a level that won’t affect astronomical images. Brialyn worked under the mentorship of William McBride (DKIST). (2016 Akamai)

Keanu Paikai
Worked on commissioning plans that will be used for making sure that subsystem components in DKIST’s thermal systems are tested, tuned and in compliance. Keanu worked under the mentorship of LeEllen Phelps and Guillermo Montijo Jr. (DKIST). (2016 Akamai)

At least 8 other students from Hawaii have completed projects at existing telescopes and tech companies on Maui, through funding from DKIST and the National Solar Observatory

For information on Akamai: akamai@ucsc.edu

For information on DKIST/Akamai collaboration: